Its been four days since we left Queensland and to be honest, there wasn’t much to see for the first two days and even less photo opportunities for #BadBetty Mk II.

The trip is starting to become as much about the people as the places we go and things we see. The trip over the Barkley Highway was uneventful on Monday and a bit numbing at times – straight lines and nothing much to break it up except chatting away between ourselves and then taking times with music in the background – the real shock (and even though we expected it, it didn’t make it any less of a shock, was the fuel prices! Thank goodness we filled up the jerry cans in Mount Isa at $1.23 per litre so we didn’t have to pay $1.92 per litre at the Barkley Homestead – the prices seem to be coming back down a bit as we head further north.

On Monday night we stayed in a free camp off the Stuart Highway and shared an afternoon & evening of laughs and far-ranging conversation with Neville and Gloria – such a lovely couple with their share of challenges through their lives but were smiling, welcoming, engaging and enthusiastic company – even I got cuddles this morning before we all went our separate ways but the phone died before mum could get a picture.

Tuesday night we are hundreds more kilometers up the road and now only 100km from Mataranka and Bitter Springs – that is something we were ALL looking forward too! We filled up at the HiWay Inn at Daly Waters today and Mum found a free shower there (seriously, you would think she found GOLD!) and Dad, in front of everyone (but it’s the NT so no one batted an eyelid!) decided that the sprinklers would make a good enough shower for him! I am just lucky that I am still nice and clean and fluffy so I didn’t suffer any indignities!

Mum got to work catching up on the paperwork (after the first wine but before the 2nd!) and although we are a bit over budget - we got some extra stuff in Mount Isa – like a wine stockpile (20 litres!) and Dad got a blower and vacuum for the bus and they both got some extra hot weather clothes - but still they are averaging $119 per day – including fuel. If you take out the extra stuff for the bus and the clothes, it will come down to $105 per day – pretty good! They are both pleased with that so far so it looks like I get to continue eating! 😊

Mataranka was better than expected – like an incredible oasis in the middle of the desert! One little girl couldn’t decide if I was real or not when sitting by the pool but wasn’t sure enough to touch me and give me a pat! We were going to do Bitter Springs as well but Dad missed the turnoff….. Mum pointed it out but Dad thought he had it sorted – yep – nope! We will pick up Bitter Springs on the way back south!

We arrived into Barunga last night – huge thanks to Ron and Linda for playing hosts to us and the #BadBettyBus for a few days! Today was one of the BEST DAYS EVER! I got to GO TO SCHOOL!!!!  I was allowed to go and get so many loves and kisses from some of the kids at the Barunga primary school this morning and they listened while mum told them all about the REAL #BadBetty and mum showed them pictures of us both and told them all about #BadBetty Mk 1 eating toilet paper and breaking her toys by eating the squeakies….. I told them that I was a much better behaved girl! Mum even showed them pictures of where we have been on our adventure so far and they promised to watch and see where I go from here on! How excited am I!!!!

We are going to see some more stuff around here in the next few days – we hope you can join us and thanks for reading – lots of love #BadBetty Mk II, Mum & Dad xoxo 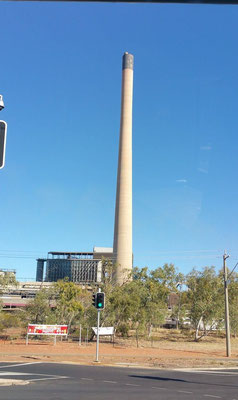 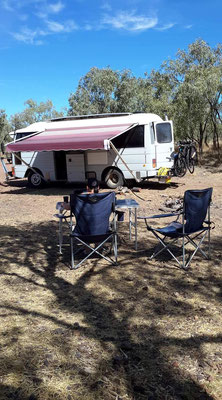 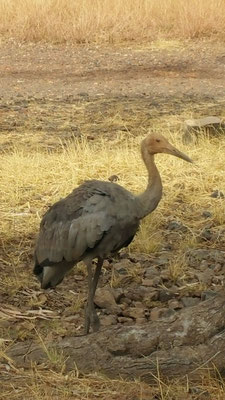 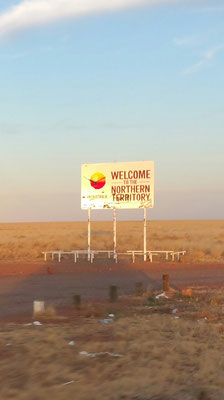 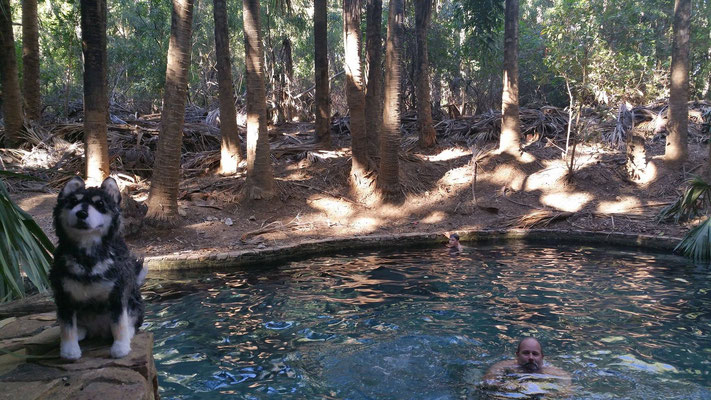 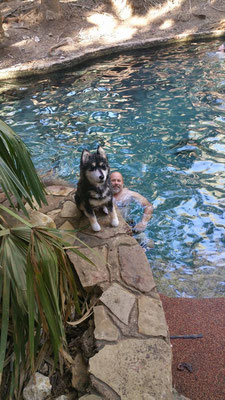 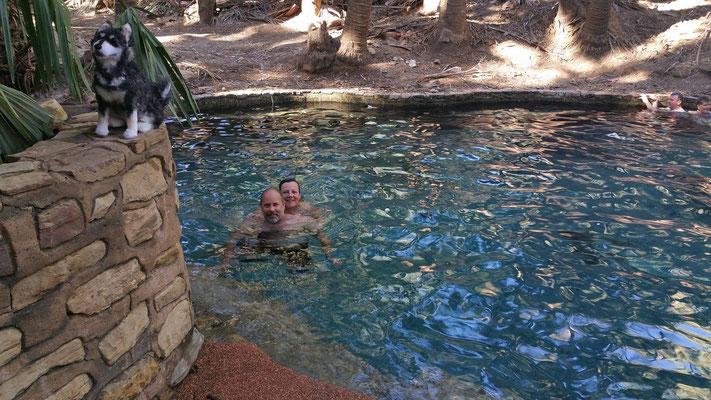 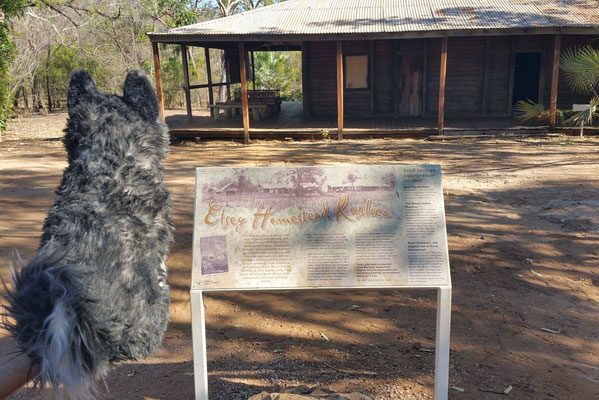 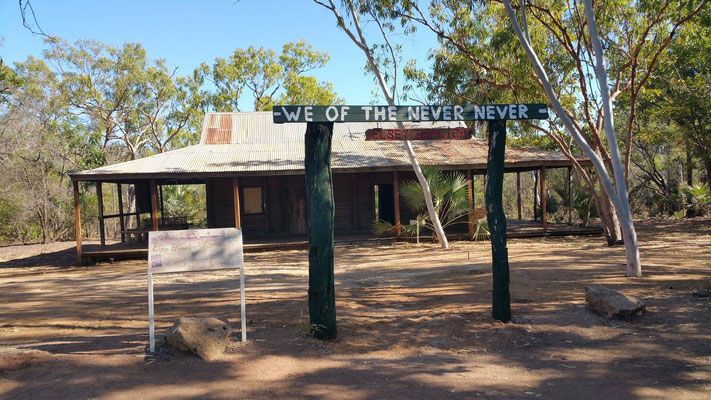 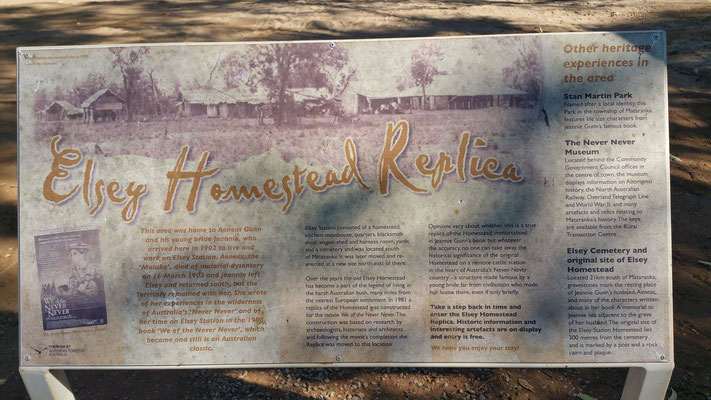 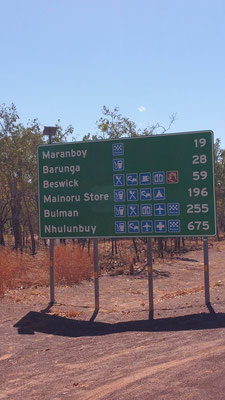 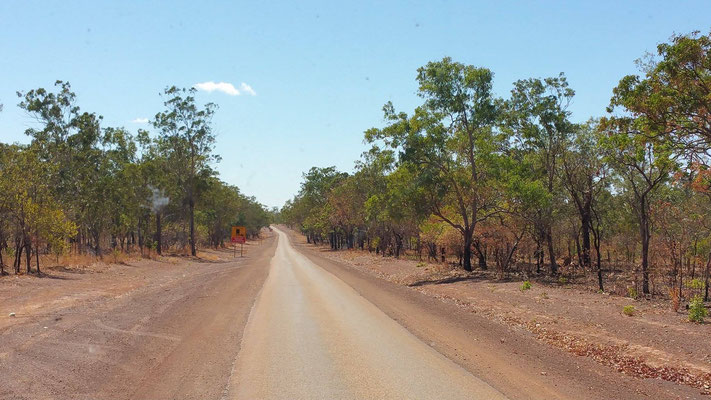 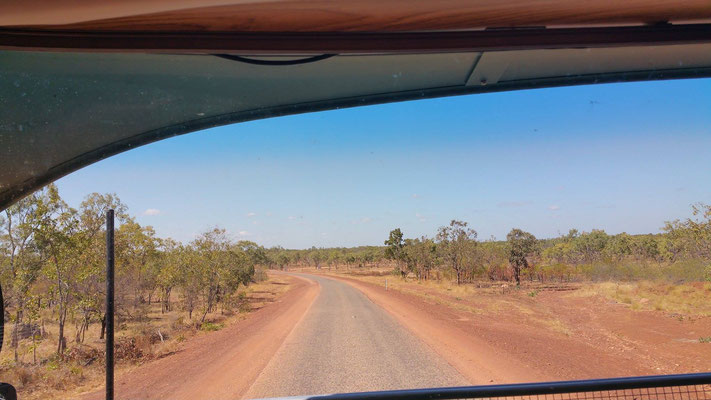 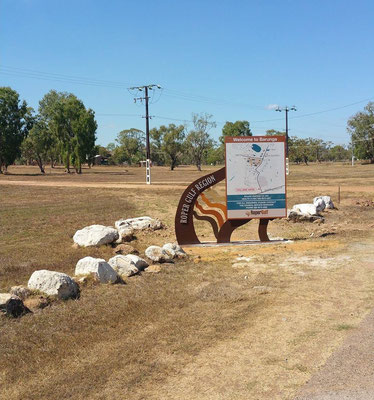 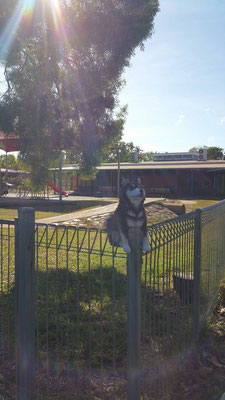 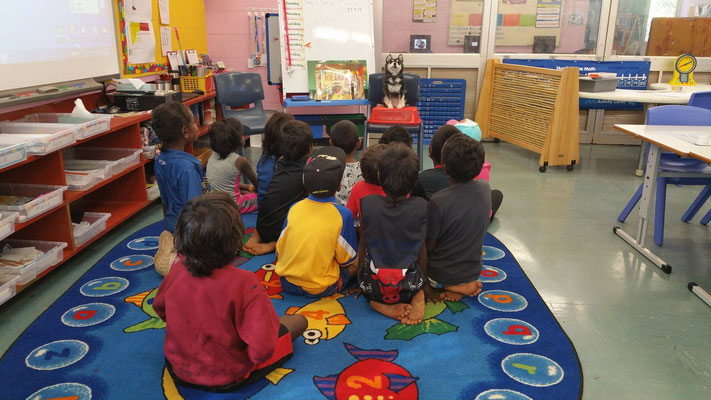 There is safety in numbers and one certainly feels more secure when there are other campers surrounding you, like swimming in the surf and hoping a shark attacks the swimmer next to you or the surfer further out and leaves you alone!
Before we left I felt it would be wise to have a security plan just in case we were camping in an isolated spot and ran into trouble so I installed a panic button - the idea being that should someone be snooping around the bus with evil intentions then I would activate the blue and red flashing lights and the 128 decibel siren before jumping out the bus butt naked with my tactical flashlight to blind any wrong doer and hopefully scare them off pronto! Had I known that regardless of where you set up camp there would be at minimum of a dozen grey nomads surrounding us by nightfall, I would probably not have bothered with the plan.
As secure as I might feel being surrounded by wrinkly old nomads the reality is that should the alarm be sounded none of them would wake up let alone rush to our aid!
I was not prepared for the sheer amount of waving one has to do while traveling. I have deduced the most efficient way to keep up a steady waving pace is to keep your arm out the window and lift your hand slightly as the nomads pass you by. How come there is so much friendliness on the road? Is it because we are sharing a common experience together exploring this great country of ours or is it because when you get older you become friendlier as you wind down and take a step back from the rat race that consumes our short lives? I don’t know but I tell you this, work out, pump some iron and get those biceps and triceps primed and ready for action because you will need strong arms ready for traveling the outback!
When free camping I often wonder about my fellow campers and how our lives have intersected at this particular trajectory sharing this camp site together. Yes very deep and meaningful I know but an interesting subject none the less, like the flight of MH 370 and the people that went missing that fateful day, hailing from different walks of life but sharing the same fate. A traveling holiday is as much about the people you meet as the places you go - some are a delight and others not. Like the strange woman two nights ago who decided that the perfect camping spot for her was no further than 5 meters (16 feet 4.85 inches) from us even though there was a plethora of choice sites for her to choose from. I introduced myself and invited her to join our campfire later that evening to which she icily replied " no thank you that would not agree with my sinuses" I wished the old cow well and remarked that if she was lucky the wind would blow the smoke away from her. (Yep - we still had a good camp fire as planned!)
WARNING - EXPLICIT LANGUAGE
I love to swear, fuck yeah. Not sure why but Lyne doesn't discourage the habit, rather the opposite, she is quite the potty mouth herself.
Recently I have taken a delight in saying the word cunt, shocking I know but the way these four letters roll off my tongue I find sinful in a wicked forbidden way that makes me smile. My favourite use of the word is in the sentence "fucking old cunt". I don't say this to offend anyone or to incite violence but rather to vent my frustration when a nomad is taking until Christmas to move from the only available diesel pump or has taken up three camping spots with their mobile mega structure. The use of this word still shocks Lyne despite her army background and she often questions the validity of my Christian upbringing and values - I remind her that I am only fucking human.
NT has a 130km speed limit allowing travelers to reduce the amount of time covering the vast distance between towns and cities - unfortunately the Bad Betty Bus won't do this speed - the old girl is happiest lumbering along at 90km hour (55.92 mph).
Luckily for us the general consensus is that you develop more patience as you age so theoretically it shouldn't bother us as much to travel this speed as it would our younger selves.
I don’t know if this is true but I can say with conviction that it doesn't bother us at all being among the slowest vehicles on the road.
As we lumber along at a snail pace you have plenty of time to think and my mind wanders around an eclectic mix of subjects like a tourist perusing exhibits at the outback museum in Longreach. I find myself thinking a lot about nothing of consequence, just random thoughts that come and leave quickly. My mind is a version of the TV sitcom Seinfeld, a show about nothing, just episodes of rambling dialogue of no real value.
Often my wandering mind is snapped back into reality by Lyne sharing an important fact or two about a particular place or point of interest - everybody needs a personal travel assistant and mine is one of the best available. Sometimes she breaks my train of thought just to tell me to slow down as we're not in a rush to get anywhere - like we are reminded in road safety campaigns, speed kills!
tagPlaceholderTags: kortmarshiba, kortmar, shibainu, shibalove, #badbetty, @kortmarshiba, #kortmarshiba, #shibainu, badbetty on tour, central queensland, northern territory, nissan civilian, kogan mobile, #badbettyontour, www.kortmar.com, #kortmarshibainu, royalcaninaustralia, kortmarshibainu, #shibalove, #mountisa, mataranka, barunga, #mataranka

We are located at Kortmar Manor, 15 Queen Street, BARMEDMAN NSW 2668.

We breed our pups first and foremost for ourselves and not to meet market demand - we make available for sale those pups that we don’t keep or place into the show ring with others - we don’t have pups available all the time and very few people that would like a puppy are going to be able to get one.

Even if you are shortlisted to receive a puppy from us, there will ALWAYS be a substantial (think years) wait for a puppy.